So, I really, honestly, totally have been working on my EoS. The only reason the blogs have been backlogged has been so much time spent on modelling and gaming lately.

Militia, when not used in small bunkers or chaff units are… pointless, at this time. I’ve played roughly 6 games with them, using various character and magic support and…. they just barely do a damned thing. Other than die. Real good at that.

If they could get Support Unit back, they’d be golden. My suggestion has been that they follow Parent/Support rules…. but only with other Militia. Yeah, there’s a bit of TVI in there… but man, oh man… that would be fun.

Anyways, one of the newer things I’m trying tonight is… 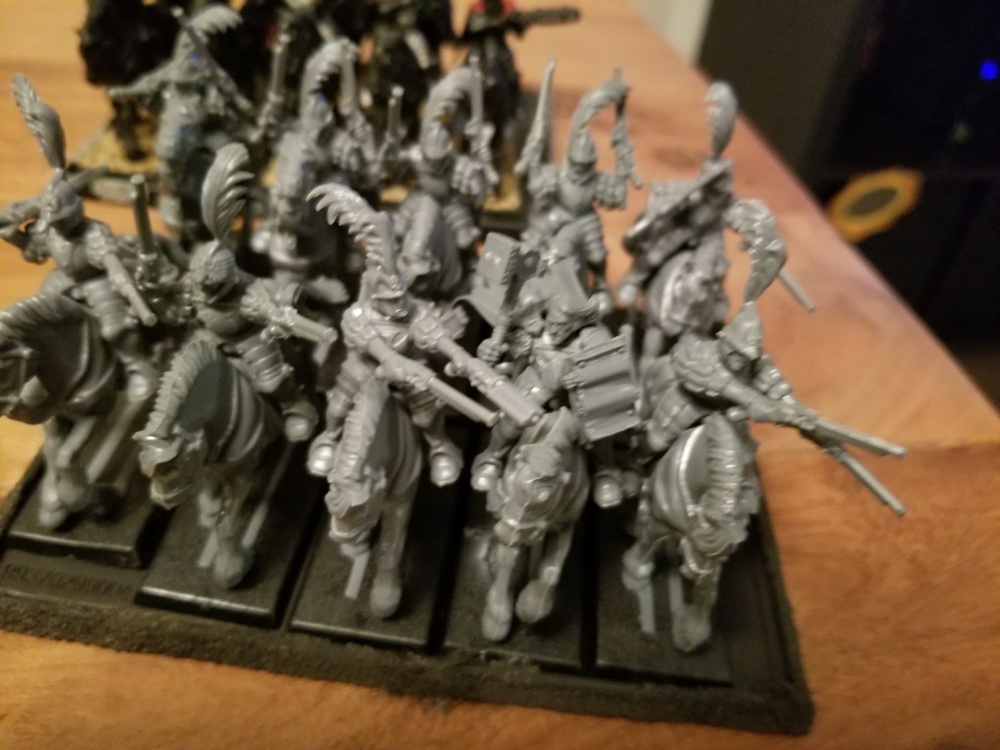 I have a feeling this could be a great deal of fun… though, I am really considering building some Light Lance/Shield Reiters and let the Pistoliers go off on their merry way as harassers (and thus, cutting the Reiters with Repeater Handguns from the list… not sold).

Here’s where we’re sitting with the Imperial Guard. They’ve been cut to 28 with Command and the Rending Standard. Still have the Prelate General and the BSB in there. That said, I’m relying a lot more on using support units (Spears and Halberds), to create uncomfortable situations for my opponents.

The previous version was 38 with the same characters in line formation. It was buffed to the max and…eh… it was a death star. Trying to spread things out a bit more, now.

Also, handgunners… lulz…no. Not a fan. The potential is there… but the dice never seem to be.

Coming later today or tomorrow, some fluff and maybe a batrep from tonight (if I remember to take pictures this time…)